At first sight, Střítež is a common village near Polička in the region of Eastern Bohemian. However, when you enter the courtyard of one of the local houses, you enter Planet Chaos.

Its activities are curated and realized by the artist Veronika Šrek Bromová who directs the gallery and conducts symposia, all the while devoting her free time to organic farming, and her husband Ivan Šrek who, among other things, works with wood, and whose works one may see scattered all around the compound. There are also two small children who play their part in Chaos. The few floors of the apartment building and its neighboring garden gradually transformed and accommodated the needs of both residents and visitors. The interconnection of life with artistic and organizational activities is very intimate here, and some of the theoretical conceptualizations for the space were inspired by the ideas of eco-sociologist Bohuslav Blažek, Václav Havel or Timothy Leary.
The Galerie Kabinet Chaos Střítež used to reside in a teacher’s office of the local basic school, located right above the local pub. The exhibitions which were meant to fill up the empty walls of the venue and to spark conversation gradually developed into an ambitious exhibition program; one which is singular not only in its focus, but also in its pure concentration. Another objective for the space was to create a place for meeting, focused especially on mothers and children, which would constitute a viable alternative to the pub. This endeavor did not however work out. Because of hostility on the part of the director of the local community committee and the subsequent eviction after two years of the gallery’s operation, its founder decided to move it into her own barn. The newest addition to the property, previously used as a depository, is the Chaos Box. Sun rays make their way through the crevices between the wooden planks, nicely lighting an installation by Diana Winklerová. Many artists who gravitate towards the themes of countryside, nature, ecology, society and public space have, throughout the years, been featured, among them Jindřich Štreit, Martin Kuriš, Jan Pražan, Veronika Holcová, Darina Alster, Kurt Gebauer, Martin Mainer or Lenka Klodová. The opening nights (they always fall on a Saturday) which take place about once a month during the gallery’s operational season (that is between March and December), attract people not only from Polička, but also from Litomyšl, Brno or Prague. Every year, the local artists have a great opportunity to present their works in the last exhibition of the season entitled “Neighbors for themselves.” However, the invisible wall of the space being on ‘private property’ discourages people from coming, and the attendance is apparently lower than it was in the former, more publically accessible, locale.
This August there will take place the Chaos Start symposium, focused on art, ecology and sociology. This year’s iteration is the sixth one, and is entitled The Four Elements Plus One. The symposia naturally developed from the informal meetings of students, some of them Veronika’s, and always include lectures, an exhibition opening and workshops which especially cater to the local children. They often move into the territory of art-therapy and rituals. “I invite the lecturers and open the space up for the whole community. I choose a theme which I find topical or one that resonates with the community. This year, I was very preoccupied with water, as I have been observing that even though it rains, underneath the grass the earth remains cracked. It is the same earth we pollute with our chemicals. I was thinking that since I have water and earth, I might as well include the other elements.” This year, the lectures will be given mostly by the locals, such as the jack-of-all trades David Havlík who has a theory about the fifth element being, in Veronika’s words, “whatever one chooses it to be. I, for instance, regard it as light, motion, maybe sound, and this guy came with the idea that it is in fact a form of gap.”
Chaos is also a farm and the locals and artists are from time to time joined by the volunteer ‘Wwoofers’ who work for food and lodging at organic farms. They come from all over the world and thus enrich the already vibrant spectrum of visitors. Apart from the ever-popular topinamburas, this year there are also crops of tomatoes, beans, potatoes, Chia seeds and corn. The volunteers are helping out with the construction of the sheepfold, partly made from old tires. Also the construction of the labyrinth (made of pebbles) is a top priority, as it must be ready for the symposium which will take place August 7 – 13.
by Lenka Dolanová 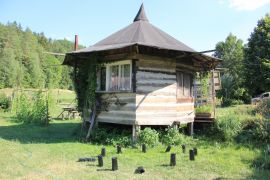 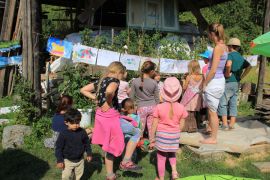 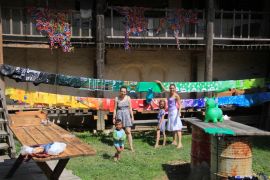