Going with the Flow, Steering its Direction

PRAHA v Brně is not simply one of Brno’s many pleasant cafes, it’s also a bustling venue for lectures, film screenings, and concerts. The space, which lies at the end of the courtyard of the Moravian Gallery, once served as a restoration workshop, as evidenced by the still-extant fluorescent tubes under which restorers worked.

For Šárka Svobodová and Barbora Šedivá, two of the three founders of the 4AM Forum for Architecture and Media, naming the multi-purpose space “PRAHA”, had a playful intent. Šedivá calls it “psycho-geographical game,” noting with amusement that they’ve succeeded in making it necessary for people to specify which Praha they mean, the capital city or the space in Brno.

In comparison with the elaborate grandeur of the Pražákův Palac next door, PRAHA’s aesthetic is contemporary and stark, with a no-fuss practicality, a remnant of the original utilitarian purpose of the space, supported by the special design of the moveable bar, which allows for quick and easy rearrangement according to present needs. PRAHA’s physical, architectural flexibility is in turn a reflection of the fluid approach of its organization, which emphasizes openness, innovation, and variety in putting together its program.

From 4AM Forum to PRAHA

Today’s PRAHA has evolved over the course of several years, beginning in 2010 when Svobodová, Šedivá and Petra Hlaváčková shared an office working at Dům umění, the House of Art, in Brno. As architectural theorists, Svobodová and Hlaváčková were involved with architectural projects while Šedivá, having studied cultural theory, management and art in public spaces, was busy organizing audiovisual events and exhibitions. In spite of their divergent interests, all three felt that a more comprehensive, interrelated and critical platform, which would delve into contemporary topics such as urbanism, architecture, and the fine arts, was lacking in Brno.

As a result, the three founded the collective 4AM forum in 2010. They then made a proposal in response to an open call for a project to make use of the space Galerie architekturý, which was accepted. The collective 4AM Forum for Architecture and Media began successfully organizing an series of exhibitions, workshops, and discussions on topics such as architecture, urbanism, the city space, contemporary art, new media, criticism, and current, problematic cultural-social phenomena.

After a year and a half, 4AM was suddenly asked to vacate the space, which has since become available for renting. What followed was a two-year period dealing with “different issues and themes” at a space on Brno’s south side, located at the Nákladové nádraží, or Freight Railway Station. In 2014, the Moravian Gallery approached 4AM with the idea of making use of the old restorer’s workshop. Architects and 4AM members Jakub Kopec and Jaroslav Sedlák provided designs for the café, creating an “architectonic project” out of the venue. The space currently includes the moveable and adjustable bar (mentioned above), a library, and a stage.

Asked how the program is put together, Šedivá notes that the 4AM Forum view PRAHA as one of its projects, 4AM itself being the platform. “PRAHA represents one of the possibilities for realizing one’s thoughts,” she offers. “4AM members function as program coordinators, putting together lectures, workshops, or concerts.” At the same time both Šedivá and Svobodová stress that PRAHA v Brně is an open space. “We don’t want to give the impression that we’re a closed group. For me it’s important that people just come by to have a coffee and, by chance, encounter the themes we’re working on here,” says Šedivá. “We also don’t want to be just a group of intellectuals working on things only for themselves. For this reason we have invited other groups to work with us.”

Today PRAHA v Brně stages a variety of concerts, lectures, and workshops. As the program demonstrates, these events are far from limited to architecture. The program includes regular events such as lectures by Marek Čejka on the Middle East, a weekly VJ-ing and electronic music workshop for children led by Markéta Lisá, and a series of presentations and discussions by artists and theorists. Films are screened regularly at PRAHA, as well as lectures and discussions on topics such as urban politics, performance, and experimental theatre, just to name a few.

PRAHA v Brně also goes beyond Czech and Slovak lecturers and artists, having featured individuals from all over Europe as well as the United States. Earlier this year PRAHA received a grant from the Dutch Embassy, allowing for them to feature lecturers from Holland. The 4AM Forum also hosts artist residencies also connected to the PRAHA space. Most recently the Slovak inter-media artist Jan Gašparovič was hosted with support from the International Visegrad Fund. This year an open call for VARP (Visual and Sound Arts Residency), also with support of the Visegrad Fund, was announced on the 4AM web site. For Šedivá and Svobodová, artist residencies are particularly important, because Brno is not Prague which, Šedivá says, has “an enormous exchange of individuals, turnover, and change in scenes.”

Food is also an important consideration at PRAHA v Brně, and it comes as no surprise that the café has meticulously selected an array of local providers for their culinary offerings while making sure to use in-season and local produce. The space even has homemade ice cream a staple, with Klára Eliášova and Soňa Borodáčova making ice cream bars using hand-made forms, and ones specially created by means of 3D printing.

The Making of a Stage: Music at PRAHA v Brně

The music program at PRAHA v Brně is run by musician and promoter Prokop Holoubek, which is a natural evolution of his work with 4AM Forum, with which he has participated since the beginning. Back when the collective was located in Galerie architekturý, Holoubek organized music events in the space as well as at Dům umění, where the three founders were then still employed. Nowadays, 4AM members Vaclav Peloušek and Ondřej Merta, who were later to become the internationally renowned Bastl Instruments put together workshops and lectures. Music events had been organized “very sporadically” according to Holoubek, and it wasn’t until PRAHA v Brně that they became more regular.

Holoubek has been a long-standing figured on the Czech and Slovak music scene. He is known as a musician in the Czech band Midi Lidi and as the founder of the music agency Bum Bum Satori. He has worked for many innovative festivals, such as Multiplace, and in 2004, along with Barbora Šedivá and Tomáš Kelar, Holoubek launched the concert series Itch My Ha Ha Ha. The series continues to this today in various Brno venues, including, of course, PRAHA v Brně.

Holoubek continues as the PRAHA music programmer, together with Šedivá for events featuring “more performative” acts, and he sometimes schedules artists he manages to play the venue. Holoubek notes that it was never 4AM’s intention to make PRAHA into a music venue and that he is careful only to allow acts that suit the atmosphere and capabilities of the space. “We don’t want to take the place of clubs in Brno. Our intention is to create an exclusive program, providing a place for events that otherwise wouldn’t happen.”

Going with the Flow, Steering its Direction

Speaking with Šedivá, Svobodová, and Holoubek it’s clear that the three are deeply embedded in the Brno alternative scene, in that they are connected to a seemingly endless labyrinth of projects, festivals, and spaces. Nevertheless, Šedivá, Svobodová, and Holoubek are devoid of any rigidity or dogmatism, and stand as representatives of a collective that is open, but with its own inherent standards. Friendly and approachable, PRAHA v Brně has become a go-to space for alternative local and international projects and the place to go for those looking for something out of the ordinary.

PRAHA v Brně
4AM Forum for Architecture and Media 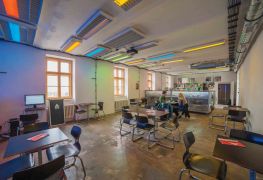 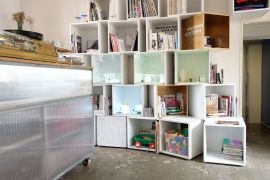 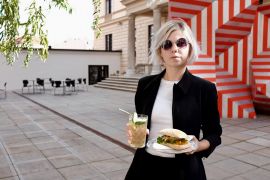 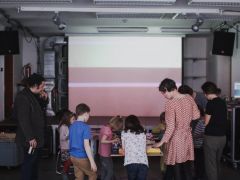 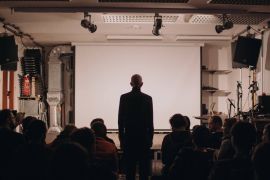 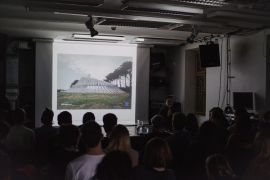