Sanatorium Dźwięku is a festival devoted to experimental contemporary music and broadly understood sound art. Its main aim is to present possibly the widest spectre of phenomena related to the development of musical forms in 20th and 21st centuries. So far they were presented realisations of about 120 artists from all over the world. Many of them were created especially for the context of the place during artistic residencies in Sokołowsko.

The festival does not only include concerts but also an array of realisations from the border of sound art, performance and projects created and dedicated especially to this event by musicians, composers and interdisciplinary artists. The festival takes place in a several places in Sokołowsko little town (Movie theatre Zdrowie, Multimedia Hall, Spring Park or the ruins of 19th century sanatorium). Every year, the festival gathers over 400 visitors from all over the world. The festival is curated by Zuzanna Fogtt and Gerard Lebik in cooperation with the curator of sound art Michał Libera. 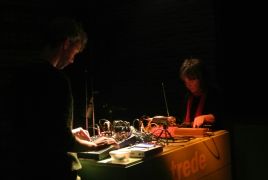