Trajna is a non-governmental organisation and a collective lead by the design duo Gaja Mežnarić Osole and Andrej Koruza, who work in the fields of design, ecology and participation.

They support solidarity and cross-species mutual sustainability through their efforts to create community economies, their design-led participatory research, and through organising workshops and designing eco-infrastructures.

At the moment, Trajna is focused on the development of creative and sustainable solutions for the management of invasive species (the APPLAUSE project). Invasive plants are for them a research tool, one that allows them to question how and with whom to collaborate in building a diverse web of life in our future ecosystems.

For their Agosto Foundation residency, Trajna will develop a didactic and creative method for introducing historical narratives of species invasion in a playful and engaging way. Their work, presented in the form of a herbarium, will function as a half-finished graphic story (a non-finito) as well a tool for fieldwork.

Herbaria were widely used by botanists and explorers during the period of colonisation, to assemble a collection of species taken from the conquered lands and introduce them into Europe. Many exotic species, popularised for their aesthetics or usefulness, are now considered to be alien invasive species. Reflecting on that specific history, the invasive herbarium will be designed to engage children in learning these narratives and the identification of these unwanted species in their local environment by co-creating graphic-plant assemblages.

Gaja Mežnarić Osole is a designer based in Ljubljana (SI). She completed her BA in Visual Communication at the Academy of Fine Arts and Design in Ljubljana, and her MA in Design Futures at Goldsmiths, the University of London. Through her practice, she has taken part in various collectives, such as G-R-U-P-A (a collective of designers, architects and artisans) and Trapez (a multidisciplinary food collective). Over the past several years she has mainly focused on creative research projects that explore ways to speak about and act upon the problem of invasive species in a creative and symbiotic way. From 2017 on, she has been continuing her environmentally and socially driven design projects as a member of the Trajna Association.

Andrej Koruza attended the Mosaic School of Friuli 2004-2007 and received a grant for the best final mosaic. In 2010 he led the production workshop as part of the group of designers, architects and craftsmen G-R-U-P-A. With their project The Shop, Koruza participated in the Biennial of Industrial Design BIO22 (Ljubljana SI) and created the projects Gostilna dela (2011) and Gajbla (2012). In 2011, he began a series of mosaic installations, studying the relations between the system, technology and society. The first in the series is Signals From the Limit, which was a featured work at the festival RavennaMosaico in 2013, and presented at the Sonica Festival (Slovenia), Izis Festival 2013 and was a finalist in the Arte Laguna Prize exhibition in 2014 at the Arsenale in Venice. In 2013 he started TOKTOK, a design and furniture production workshop, leading a successful Kickstarter campaign with a wooden speaker on Kickstarter. From 2017 co-leads the Trajna Association and plays football on Wednesday nights. 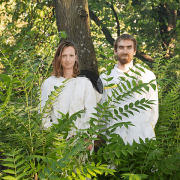 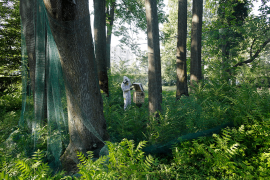