At the beginning of June, a conference on the pressing theme of Art in the Anthropocene took place in Dublin, Ireland. This term, though already commonly used in the media, is still rather new and sometimes criticised.

It defines a period in which human activities become one of the main foreces fundamentally influencing the global ecosystem of the Earth. The three-day conference focused on various approaches and themes, especially as they relate to art and education. 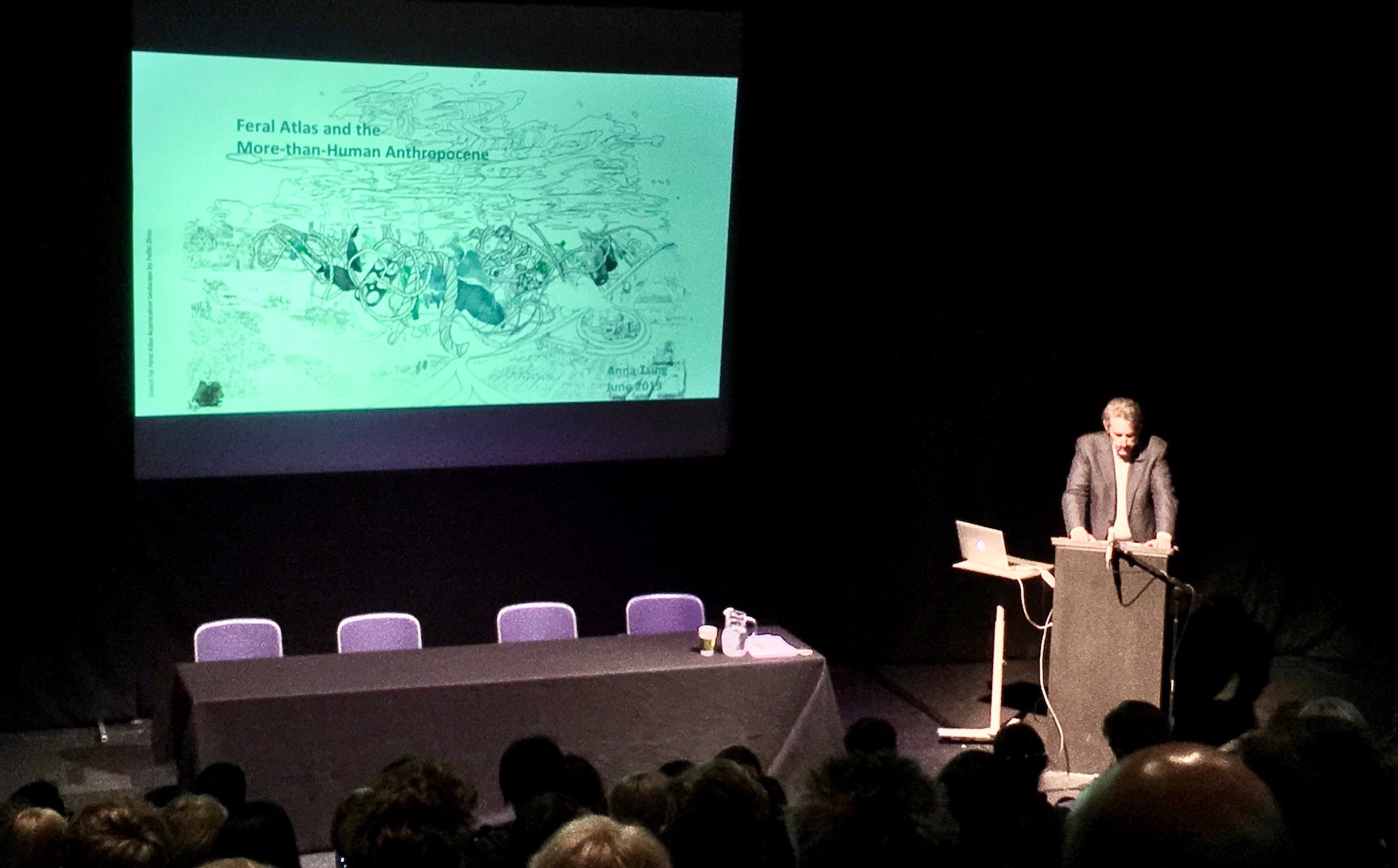 The conference took place at the Trinity College campus with the participation of more than 170 artists and theoreticians. The contributions were divided into thematic sessions, organised in parallel blocks. The sessions covered all kinds of topics ranging from political, ecological and social, philosophical and anthropological, including topics focused on specific areas of art, its genres and interdisciplinary connections. 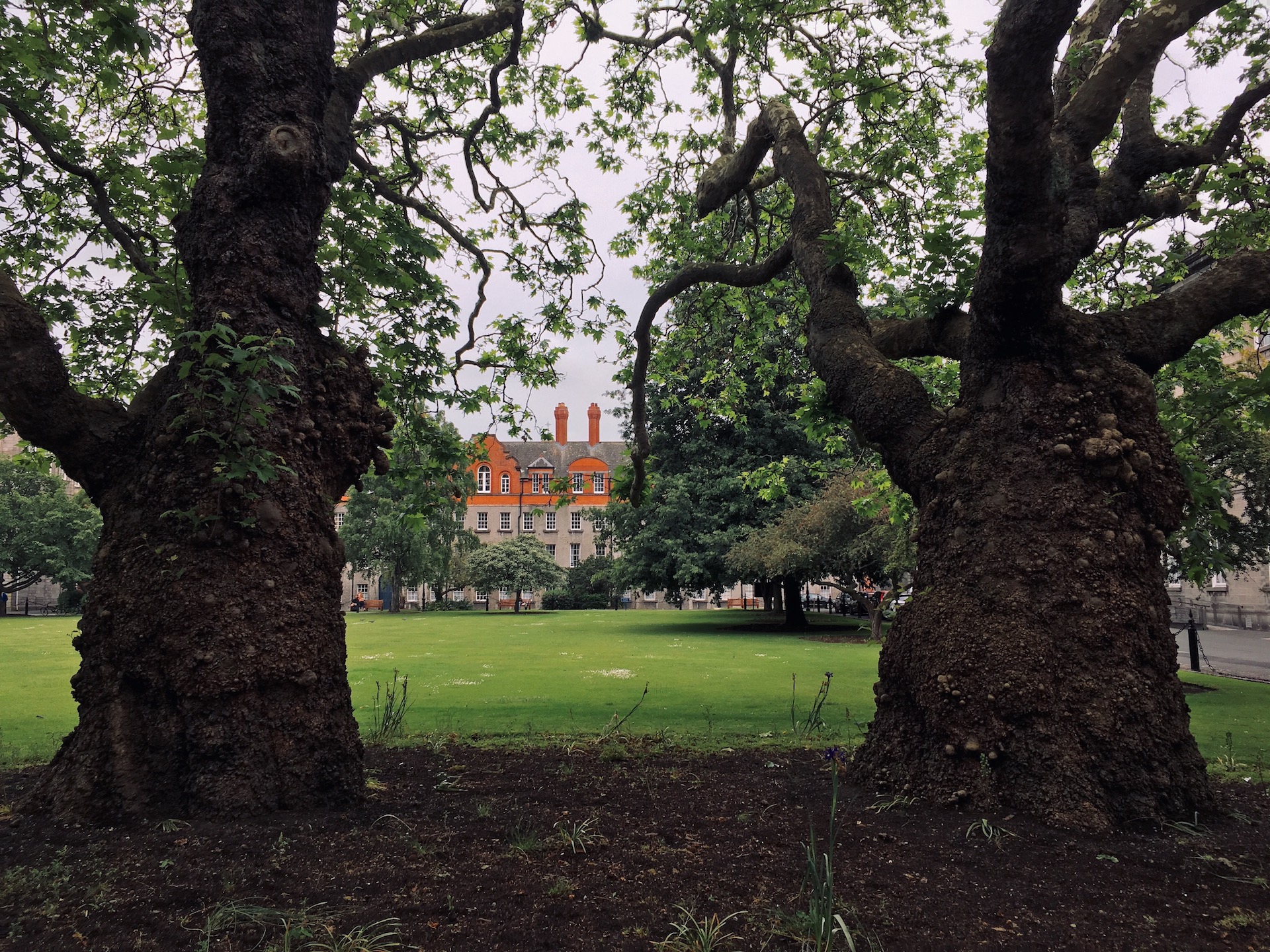 The blocks of lectures were framed by several excellent keynotes. The first was by Anna Tsing, professor of anthropology at the University of California, Santa Cruz, and a Niels Bohr Professor at Aarhus University in Denmark, where she co-directs Aarhus University Research on the Anthropocene (AURA). Tsing is the author of the successful book The Mushroom at the End of the World: On the Possibility of Life in Capitalist Ruins. At the conference she was critical of the anthropocentric view of the anthropocene, and by means of examples she talked about the complexity of ecosystems and the necessity for interspecies synergy. The lecture was strikingly refreshing and inspiring. Tsing, trough concrete examples, dug into the heart of the problem – our collective human blindness to our current alarming environmental predicament. 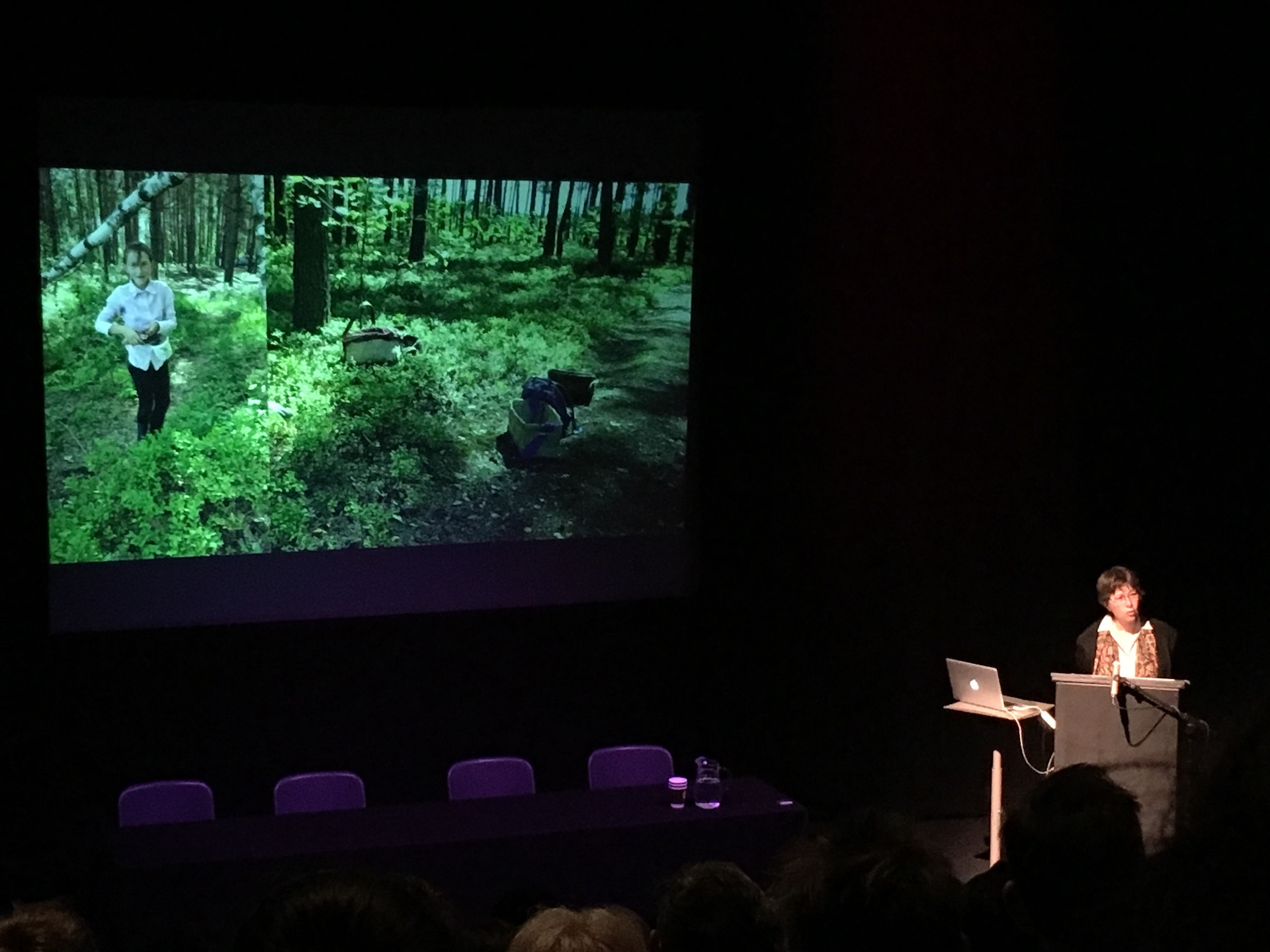 The next guest was Cary Wolfe, a professor from Rice University in the US, and founding editor of the Posthumanities series at the University of Minnesota Press, as well as the author of such books as: Animal Rites: American Culture, The Discourse of Species, and Posthumanist Theory. Wolfe focused on the relationships between the arts and post-humanism, especially in connection with his books, together with the interpretation of an artwork. As a case study, Wolfe analysed the multimedia installation Passenger Pigeon by American sound artist Michael Pestel, who devotes his artistic practice to birdsong and the extinction of birds. 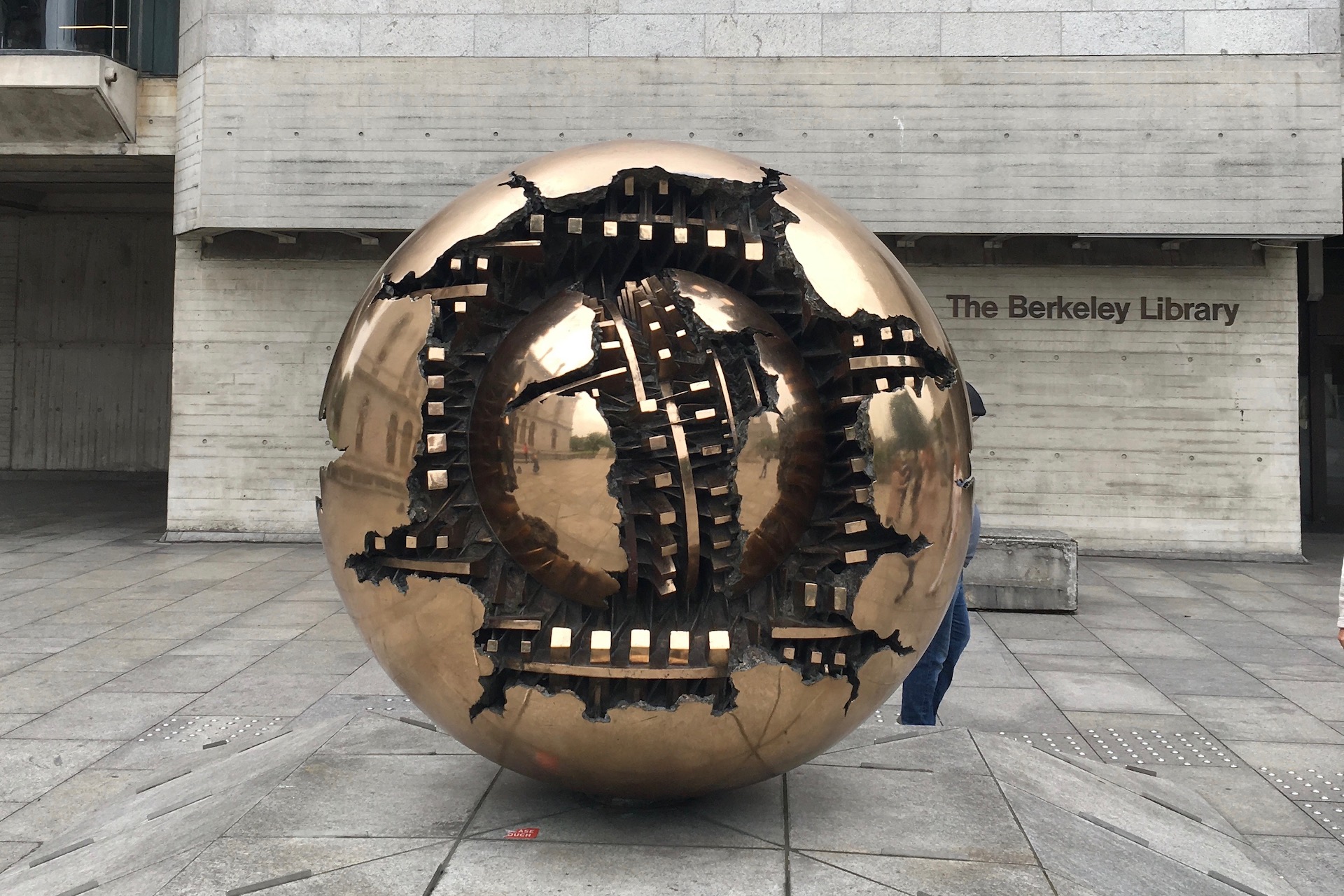 Next was Monika Bakke, associate professor in the Philosophy Department at the Adam Mickiewicz University, Poznań. Bakke writes on contemporary art and aesthetics with a particular interest in posthumanist, trans-species and gender perspectives. In her lecture she focused on non-living nature, rocks, minerals and elements, which have acquired increasing interest within art practices. At the conference several artists, such as Burcu Baykan, Yvanna Greene, Kate Lewis Hood, Andrés Salas, Denise Varney, Julie Andreyev and Carmen Concilio, reflected upon such topics. Bakke talked about “mineral evolution,” a new articulation of mineral diversity, planetary mineral specificity and emerging mineralogical complexity. With the current awareness of the processes leading to the formation of new minerals – including mineral entanglements caused by humans, it seems necessary to start considering mineral species to be active entities in species diversity on Earth and beyond.

Una Chaudhuri is a Collegiate Professor and Professor of English, Drama, and Environmental Studies at New York University. She is a pioneer in the field of “eco-theatre,” performances and theatre plays, which reflect ecological problems, and also in the field of ecocriticism, which studies art and literature from an ecological perspective. In the lecture Chaudhuri focused on an analysis of several long term performances with emphasis on the extensive perception of time and space, with a sensitive focus on climate and ecospheric themes. Case studies included a thirteen-hour performance 36.5 / A Durational Performance with the Sea by American artist Sarah Cameron Sunde, as well as the hybrid installation/theatre/performance How to Build a Forest by the artist group PearlDamour. 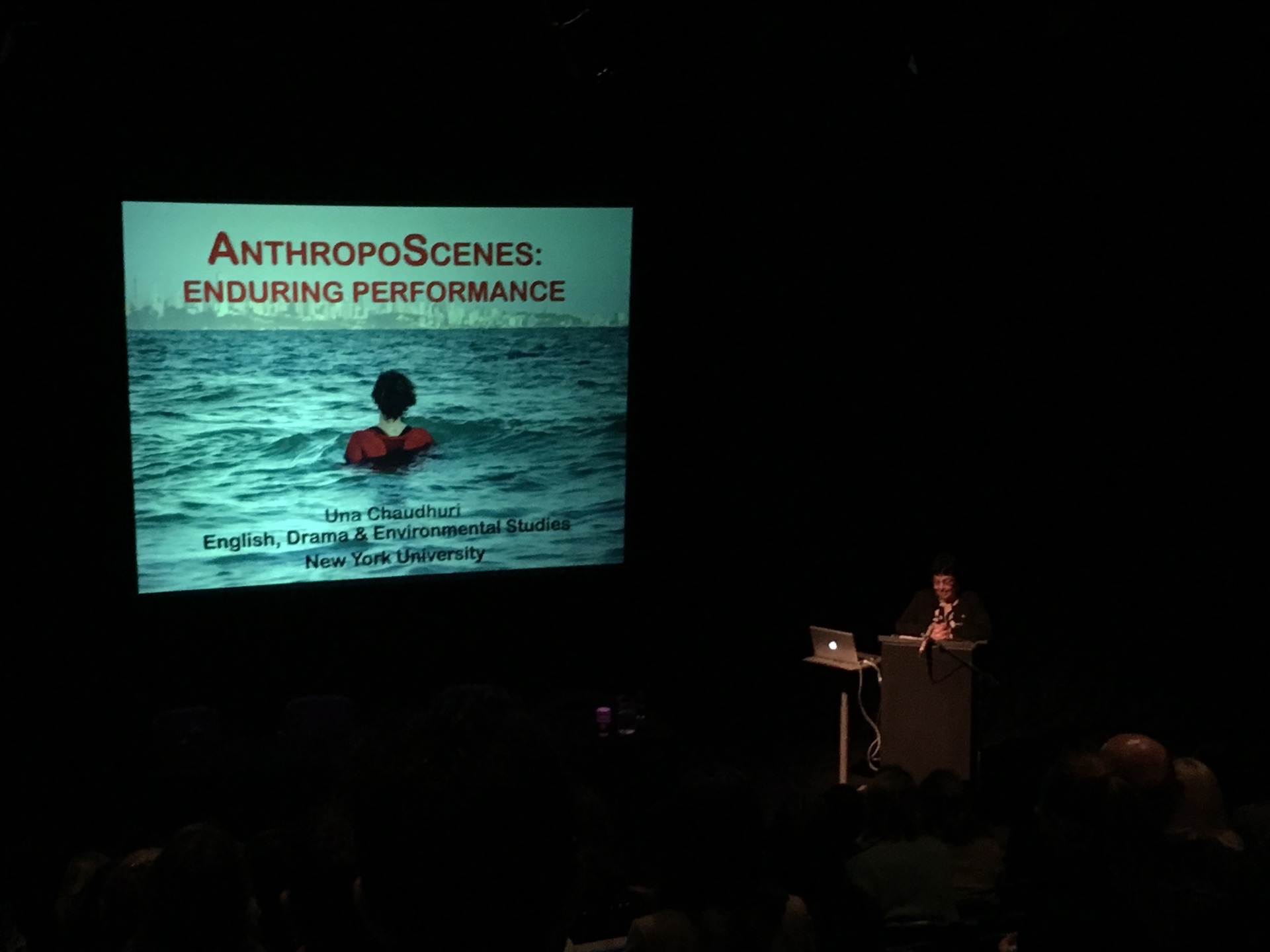 Jussi Parikka is a professor at the Winchester School of Art (University of Southampton), the founding co-director of the Archaeologies of Media and Technology (AMT) research unit and visiting scholar at the Academy of Performative Arts in Prague, as well as author of the books: Insect Media and A Geology of Media. He presented complex work by Tomas Saraceno, mainly focused on Saraceno’s exhibition and interdisciplinary project On Air for Palais de Tokyo in Paris. Parikka introduced work by the artist in the context of the current situation of large-scale biodiversity loss, mass extinction, global warming, and the Anthropocene. 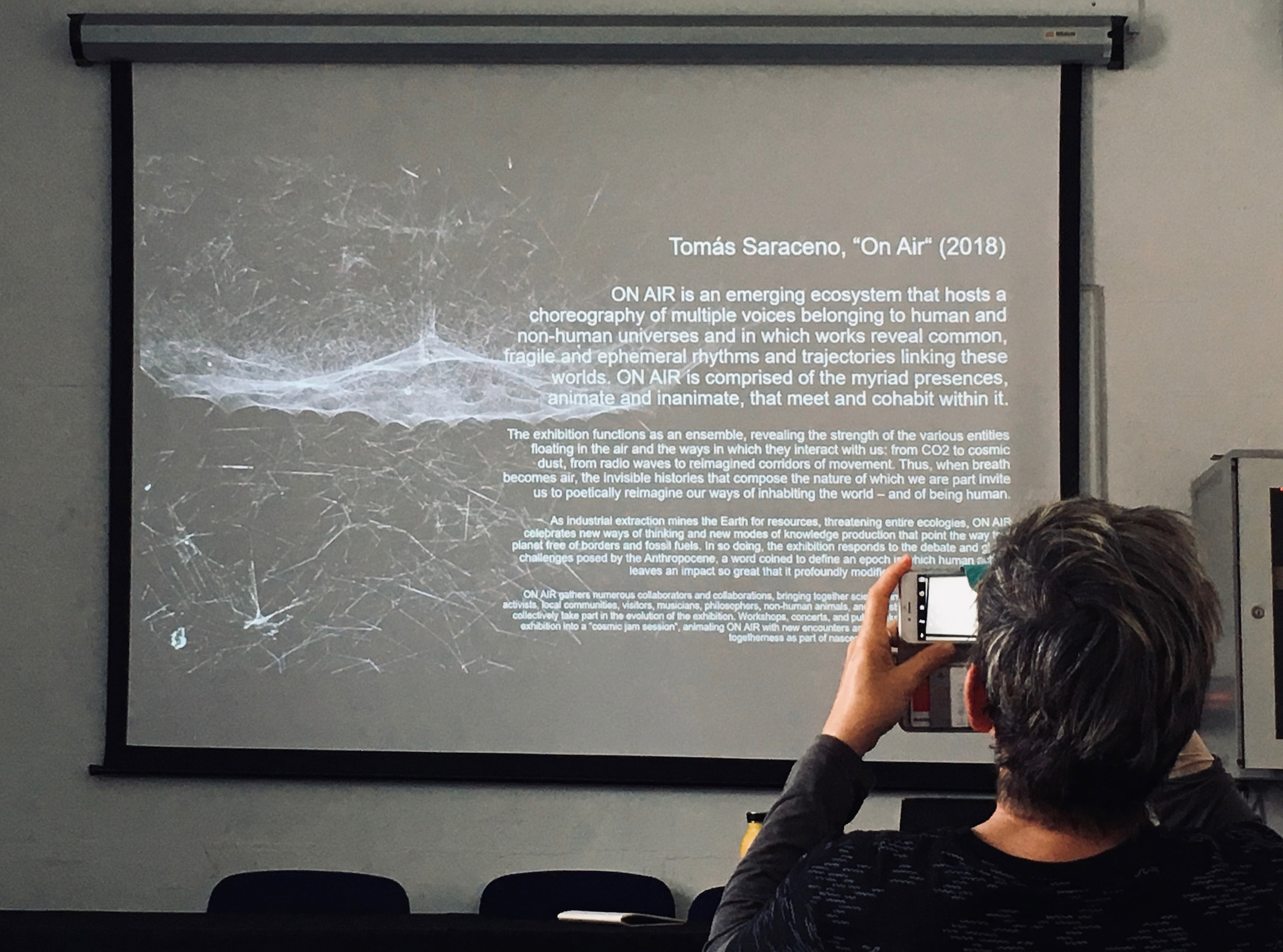 A number of artists and PhD students of various art schools also presented their projects and papers. I did not observe that there were many projects which overlap with non-art or non-academic areas. I also wished for more examples of connections between art and activism and concrete responses to environmental and socioecological issues. The conference therefore maintained a largely academic character, which was certainly the intention; and it is necessary to say that the dramaturgy and structure were undoubtedly superior. Small pity then, that it failed to break down the rather traditional format and come up with possibly a more radical interdisciplinary program, which would outline certain questions and answers, ones which were not heard in the conference (or outside the sessions), which are very essential for the current reality.