If you have ecological or other reasons for not going on the traditional pilgrimage to the Venice Biennale along with hundreds of thousands of other tourists, this June there was a good alternative right in central Bohemia. The first ever Benátky Biennial took place in the baroque spaces of the Benátky nad Jizerou chateau from 25–28 June.

This festival of “art and permaculture” featured performances, film screenings, workshops and sound walks, but also included discussions on the topic of ecology and its relation to artistic production. The featured artists were mostly university students of various art institutions, such as FAMU, FaVU, ÚJEP in Ústí nad Labem; and DAMU and AVU in Prague.

The festival also featured the work of established visual, and performing artists such as Pavel Mrkus, Miloš Šejn, Diana Winklerová, Daniel Hanzlík, David Helán, Dagmar Šubrtová, Vladimír Turner, Martin Zet, and the musician and write Miloslav Vojtíšek (AKA S.d.Ch), who came with the band Ruce naší Dory. The art works were mostly exhibited in the chateau gardens, in the nearby stables and other spaces graciously provided by the Benátky municipality, while the panel discussion and film projections took place in the house of culture – the so-called Záložna – which stands on the old Benátky square, right beside an original cubo-futurist house (No. 41) designed by architect Jiří Kroha, and right across from the fountain (designed by Pavel Mudruňka) which depicts a unique model of the solar system, as envisioned by Tycho de Brahe. During the reign of Rudolf II, the famous astronomer had his observatory in the top-most floor of the chateau and is still open for viewing as part of a guided tour.

The context of these unique spaces framed the Biennial, which was an important factor for the project’s original vision. As the organizers write in their official statement, the Biennial “… was logically inspired mostly by the chateau’s surroundings, and draws on its locale. The installations and interventions react to the space’s character and work with the reactions of the locals and of the audience.”

The spaces of the baroque chateau and its neighboring structures allowed the contributors to work with the site’s specific context – whether it was on the meadow which was dominated by an old gingko biloba tree where composer and HAMU teacher Jan Trojan produced his piece for feedback, or the Plajch podium where UJEP students Iva Polanecká and Polina Khatsenka performed and amplified the sounds of a Chinese tea ceremony, or the multichanel sound installation of Barry Wang, Jan Krombholz and Polina Khatsenko which brought the sounds of the Jizera river to the chateau’s old cellars; it was the context that made each piece unique and impacted the audience’s senses in novel ways. This architectonic environment, where the greenery of the gardens and nearby park naturally melded with the live constellations of art interventions and performances, created a perfect space for open communication.

While the program’s largely improvised form may at first sight have seemed a bit ephemeral, the festival’s thematic conception zeroed in on one of the most pressing issues of our time: climate change and the threat of accelerating environmental collapse. This Biennial’s motto was “The possible is necessary” and, according to the organizers, points to the “… ambivalent imperative of our choice: what will we decide today? And how will our choice impact further choices for the next 20 years?”

The organizers further comment that “… what yesterday or today may have seemed as one among myriad choices for moving ahead into the future, might soon become an unavoidable, and probably very uncomfortable, necessity.”

The festival thus directly addresses the findings of the most recent IPCC report which warns that we have a very limited window of opportunity (no more than 12 years) to avert the catastrophic course our civilization has taken. The artists and other invited guests mostly focused on this planetary challenge. As part of the accompanying discussions, one central question kept coming up: what role will art play in the age of the Anthropocene and of the Sixth Extinction?

Newton Harrison, the American pioneer of environmental-art and one of the co-founders of the Harrison Studio project, gave the festival keynote, and the issue of the overlap of art and ecology was also the subject of the final discussion which took place on Sunday. The speakers included activist and Extinction Rebellion CZ coordinator Arne Springorum, and activist Gabriela Benish Kalná who, along with the artists and the locals, spoke about the environmental challenges which contemporary civilization faces. The town of Benátky seems the perfect place for holding such a discussion since, apart from the town’s beautiful old center and unique history, there is also the largest sorted waste dump in the entire Czech Republic, the area of which is furthermore set to increase in the near future.

The idea for the Benátky Biennial was conceived and realized by the students of the Center for Audiovisual Studies at FAMU. They worked under the patronage of Miloš Vojtěchovský who, in the 1990s, was one of the main initiators of the Hermit symposia which took place in the former Cistercian monastery in the town of Plasy (Pilsen region). The Benátky Biennial was prepared in collaboration with the municipality of Benátky and with the support of AMU (the Academy of Performing Arts) in Prague, and in a way attempted to salvage the informal student festivals of Czech New Media and performance art schools which used to take place around the turn of the millennium in the west Bohemia town of Cheb.

When asked what the original source of motivation for organizing the Benátky Biennial was, the organizers answer candidly: “The task was as follows: start something new from scratch, try to get out of your comfort zone, do something for others and stop thinking about yourself.” 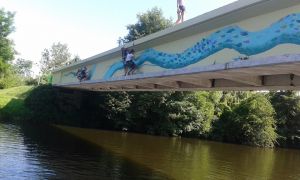 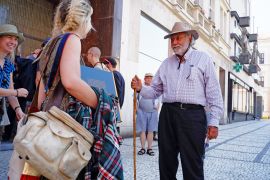 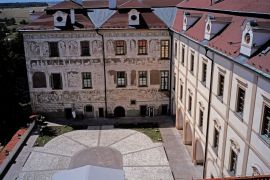