Vladimír Václavek is one of the most significant personalities of Czech music. In 1980´s he met several musicians with whom he has been cooperating on various projects since then. His career as a musician is connected with the names of Iva Bittová, Pavel Fajt and Josef Ostřanský who he joined in the band DUNAJ. He played the bass guitar at that time but he changed it for a guitar. From the mid 1990´s he played in the bands E and DOMÁCÍ LÉKAŘ and he also released his first solo album JSEM HLÍNA, JSEM STROM, JSEM STROJ ( I am earth, I am a tree, I am a machine). Around this time he also founded a Moravia-Japanese-French group RALE that released three successful albums inspired by the cultures of several continents containing rustle of six languages. 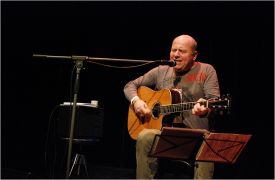