"Big actions are not necessary, it is for example enough to move a stone slightly. The things fill the space, we shift them into another space and find out that the old space still contains these things.
The space between a stone and a piece of wood is different, from that between the wood and the stone. We can touch space by sticking our hand where there is nothing.
I took some rubbish in my hand.
I laid my hand on the trunk of a tree; nothing happened, so I took it away again.
Everything is quite simple, as long as we are able to forget what we were taught."
Marian Palla, 1992
"Palla spent maybe two weeks in Plasy, dividing his time between discussing and collaborating with other participants and writing on his portable typemachine. During the June festival, he exhibited two huge objects/sculptures in the corridor, which he made from clay and stray: a huge nest and a kind of halfmoon, or white bread roll. Further on sown the corridor he performed music on a piece of wood, stones and water as a solo piece, and in a duo with Jo Truman on didgeridoo."
Miloš Vojtěchovský, 2018

Marian Palla (born 1953 in Košice) is a Czech visual and performance artist, writer and musician. He graduated from Janáček Music Academy and in 2000 from the Faculty of Fine Arts in Brno, where he worked as pedagogue between 1994 and 2010. He also played double bass in the Janáčkova Opera orchestra in Brno. He held several solo exhibitions, both in the Czech Republic and abroad. His work makes use of humour, dada, and nonsense poetry. The publishing house Větrný mlýn published several of his books. Marian lives in Střelice near Brno with his dog Bruno and several chickens. 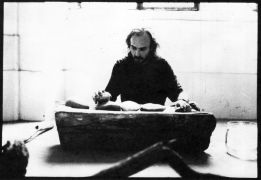