Miloš Šejn will christen his new two-disk edition of Obraz-tělo-zvuk/Image-Body-Sound, released by Guerilla Records on his 70th birthday. Included in the event will be the presentation of the new book Časopysk by David Helán, once a student of Šejn, who now also performs with him. In addition, ArtMap will bring us up to date on future creative encounters and performative dialogue.

Miloš Šejn will host the launch of a two-part DVD edition Obraz-tělo-zvuk/Image-Body-Sound released by Guerilla Records for his 70th birthday. Together with this will be presented the new book Časopysk/ABC elán by David Helán, who once a student of Šejn, but now also a co-performer. In addition, the ArtMap space will stage their next creative meeting and a performative dialogue.

Miloš Šejn works in the fields of visual art, performance and study of visual perception, and conducts workshops, such as Bohemiae Rosa. His artistic concept was formed in his youth when he undertook many trips into the wilderness as a reflection of an inner need to get closer to the secret of nature and observe the miracles that happen in it. From the beginning of the 1960s he took pictures, drew, collected and described his observations of nature during these wanderings. Currently he teaches privately mixed media and the relationship of nature and art as intrinsic needs of the mind, and focuses on immediate creative possibilities, based upon relations between historical humanised landscapes and intact nature. He consciously is working in the areas of expressive language among text, visual stroke, body movement, voice, and expansion into space.

The CD contains various field recordings, such as the “ambient symphony” Colorum Naturae Varietas, while the DVD includes 27 recordings of a wide range, including performances, documentary works, video art, dream visions, drawings, images of nature, and the like. Included is a comprehensive interview, which in shortened form, appeared in the Revolver Review no. 103/2016. In all, the collection comprises an unusual, uncensored probe into the soul of the versatile artist, who in his work goes “beyond the limits”.

David Helán takes up the conceptual tendencies of the latter half of the 20th century. His works are scattered broadly, including performance, video performance, action art, installation, photographic works, fine art and new media, and their fusion. His name is also linked with the artist David Hřivňacký, with whom he has staged various performances mostly in gallery spaces. It is a characteristic of Helán and Hřivňacký’s works to use dadaistic principles, spontaneous immediacy, experimentation and humor. Last year, the dual-language author’s dictionary Časopysk won the call at the annual pilot project Artist Book #1 in Meet Factory. 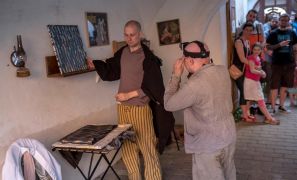