Tamás Sajó, art historian, translator and blogger, has prepared an introductory online course on various aspects of history of Prague and the art of its historical periods. 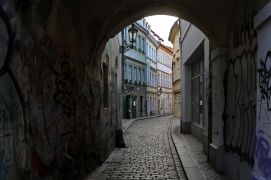