From 1992-99, the Hermit Foundation and the Center for Metamedia held a series of symposia, exhibitions, concerts and artist residencies at the former Cistercian monastery at Plasy, in northwest Bohemia.

The main goal of this grassroots initiative was to connect experimental art and culture in Czechoslovakia with that of contemporary Europe and with a worldwide context and with the specific location at the same time. The program was interdisciplinary: there met and collaborated in total several hundreds of Czech and international visual artists, musicians, sound artists, performance artists, filmmakers, writers, and video and new media artists. The rather ambitious project to establish at the end of the 1990s an international art center at Plasy ran aground; nonetheless, during the course of its almost ten years of activities, the organizers published several documentary catalogues, including a series of compact discs with recordings often made mostly by the AVIK studio from Pilsen. Selections from these audio archives have been divided into three independent episodes, which have been composed by the curator and academic Miloš Vojtěchovský, who initiated the project in 1991 and edited most of the catalogues and compact discs.

The Agosto Foundation, since 2017, has supported this archive project, allowing the digitization and publication of text and image documentation of the activities of the CMM in Plasy — today an all but forgotten chapter of the recent history of contemporary Czech art. The three episodes combine musical fragments recorded during the Hermit festivals, together with several interviews and field recordings of the environs, as well as the resonant interiors of the convent building, designed and built on 200 oak piles as an enormous musical instrument.

After entering the convent, the visitor is overwhelmed not only by its size but also by the unexpected acoustics of its spaces. For the participants of the Hermit Symposia, listening perhaps constituted the most powerful inspiration. The acoustic core of the monastery is the chapel of the intended but never realized cathedral which was dedicated to Saint Benedict of Nursia (470-547) - the founder of the Benedictine (and Cistercian) order and patron of Europe. The oval cylinder, illuminated by a roof lantern, was designed around 1711 by the architect of the Baroque reconstruction of the convent Jan Blažej Santini Aichl. The building was completed after thirty years by Kilian Ignac Dietzenhofer. The chapel is 25 meters tall, with a diameter of 12 meters, and its spatial and acoustic parameters are shaped for ideal resonance of liturgical singing and spoken word: sustained resonance counts approximately 20 seconds, and even the quietest whisper and creacking of wooden benches circles around the walls and upwards toward the lantern. Some of the musical improvisations were recorded in the smaller chapel dovoted to St. Bernard of Clairvaux. It is situated in one of the corners of the square building and has shorter reverberation time and brighter acoustics. Another feature of the aural topology of the first chapter is the rhytmical clapping of the clock machine and the voice of the bells on the Baroque granary. It was built around the original King's residence from the second half of the 13th century and rebuilt by architect Jean Baptiste Mathey. He added a pair of rhizalits and a tower, where there is a clock machine from 1686 still in working condition. For several decades Mr. Robert Drozda (and recently Mr. Ivo Kornatovský), whose voice is also on the show, care daily about the clock machine. In the sound collage we can hear as well the voice of the architect Zdeněk Chudárek commenting on the current state of the historical research, which is currently under way in the former prelatura.

Episode two: Following The Traces Of An Ermine
Listen: prehravac.rozhlas.cz/audio/3981587

The enigmatic image of the diappeared ermines refers to the track of one of several compact discs recorded during the 1990 s in Plasy. The members of the occasional collective Another Velocity of Time spent several days in a recording session in the St. Bernard's chapel and left with several hours of spherical music. In 1993 one of the musicians, Luboš Dalmador Fidler, mastered a remarkable CD for the then emerging label Indies. The chapter begins with an impromptu encounter of the British guitarist Fred Frith and the Czech percussionist Pavel Fajt - one of the first concerts organized in the convent during the summer of 1992 - which was one of the initiating musical events for the continuation of the entire Hermit project. Thanks to the cooperation with the local Avik sound studio, a cassette tape with 90 minutes of recordings was been released and attracted the curiosity of a number of artists from around the world to travel to Plasy during the coming years. In footsteps of hermetic ermine, the listener can take a short sound visit into the watery cellars of the convent with the sound of water drums by Pierre Berthet. French composer Christophe Charles compiled his composition from field recordings he captured in the convent and created a 4-channel sound installation, which resonated in the corridors of the convent in the summer of 1996. What follows one track from the CD Bambuso Sonoro, which Dutch instrument builder and sound artist Hans van Koolwijk recorded in Plasy in 1998. The fragment of an interview with Pavel Kodera - the Director of the Center for Architectural Heritage, since 2017 operating in the buildings of the former monastery Plasy, outlines the submerged continuity of the Hermit ideas which, in a sense, still linger in the corridors, even after 25 years.

Episode three: As if
Listen: prehravac.rozhlas.cz/audio/3981594

The third chapter includes another portion of the recordings selected from a dozen CD albums, recorded directly in Plasy monastery, or performed there. It is important to keep in mind that most of the musical materials were not compositions, but improvisations - sonic interventions into the particular architecture, into exceptionally resonant interiors. Actually this was the basic conception for the entire program and intention of the summer symposia and art residences there. The audio tracks - fossilized sediments of the Age of Hermits traveling on air from far, by-gine eras should evoke for the listeners the communal atmosphere of the sacral architecture where most visitors subconsciously lower their voices and sharpen their sense of hearing. The majority of these samples derives from live performances, some from private recording sessions, and it also includes several samples of sound installations and field recordings or interviews made quite recently.

Thanks to all of the above-mentioned artists for their kind permission to use their work in these broadcasts. 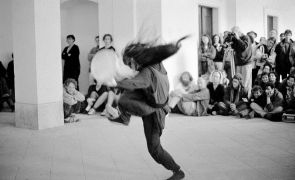 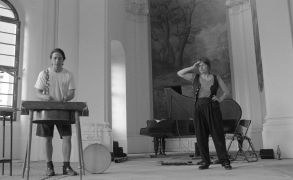