Vernissage: September 23. Dernisage: October 24, in conjunction with the conference and a performance by Miloš Šejn, Stefan Bohnenberger and Orloj snivců.

The catalogue was published by Hermit Foundation and Society of Friends of Plasy in occasion of the 850th anniversary of the founding of the Plasy Monastery (1145–1995).

The universal divine being can be imagined as an ocean. Infinite and seemingly at least on surface divided into countless individuals, people, animals, plants, minerals, continents, planets, stars, and galaxies ... These are just waves at the sea of individual being. And now imagine that the waves on the ocean will feel suddenly individualized and thus “egonized” so strongly that they seem to be separated not only from each other, but even from their archetypes. And only when the sea gets calm, waves disappear, the waves find out with surprise that they were and still are, in fact, the sea.

(This content is in the process of being assembled. We apologise for any erroneous or missing material.)

The art symposium Fungus: Inquiry of Place 1145–1994 took place at Plasy Monastery from September to October 1994, after the summer symposium Hermit: Transparent Messenger. Miloš Vojtěchovský contacted the Belgian art historian and curator Mimi Debruyn, who planned a series of exhibitions, conceived initially together with the Belgian artist-curator Hugo Debaere (1958-1994). Subsequently, they contacted the Dutch curator Ron Miltenburg and the German Munich-based curator and author Gerhard Effertz. Together, they agreed on shared concept and the topic of “eco-art” for the project. The curator and art historian Jiří Zemánek from Prague, Czechia, and Jana Geržováfrom Bratislava, Slovakia, accepted invitations to participate in the preparation and the selection of the Czech and Slovakian artists. The invitees were spontaneously joined by Igor Hlavinka, who at that time was in “residency” at Plasy, working in the prelature.

The environmental theme of the event was reflected in the small scale in the then-ongoing exploration and sanitation of the water system under the monastery by a group of spelologists (Řehák Company) who specialized in the examination of the foundations of historic monuments. The system had apparently not been maintained for decades, and was not functioning properly, the free movement of water being blocked by rubbish and sheets of plastic. Also, leakage from the nearby municipal sewage into the water system caused the rotting of the oak pilings, upon which the building of the monastery was erected. Also, a wood-eating fungus was probably omnipresent in most of the wooden structures of the monastery’s buildings. The project aimed as well to reflect the environmental issues in the broader scale, which can be seen in some of the installations and in the texts in the catalogue, this project can be considered as one of the first attempts to link ecological issues in contemporary art to the Czech Republic with a crisis of global Earth systems and environment.

The symposium participants arrived gradually. Some of them met during the opening on October 24. Miloš Šejn and David Garcia made use of video, while other artists mainly used the context of the place, found objects, or other materials. The closing event was accompanied by a discussion (the beginning of which is documented on video). Among the speakers were: the literary theorist and semiologist Willie van Peer, and media theorist Paul Groot (Amsterdam), SCCA director Ludvik Hlaváček, the artists Hans Lemmen, Charlie Citron, David Garcia, Geert Bisschop, Miloš Šejn, Jan Svoboda, the curators Ron Miltenburg, Gerhard Effertz, Miloš Vojtěchovský, among others

The catalogue was published later, in the early spring of 1995 in an edition of some 200 special designed assemblages: It took the form of a small monochrome printed catalog on recycled paper, a set of 19 black and white postcards with photographs of works by each participant, all encased in a olive-drab tube for gas masks, together with a small map of the monastery and a handful of dry hay (the gas masks tubes were found in one of the dark rooms of the monastery - masks were not included). The catalogues were distributed to the artists and the curators. Due to its anomalous appearance and irregular format, it is likely that only a few have survived.

The symposium received a modest critical negative reflection by Jana Tichá in the magazine Ateliér, Jana Geržová reviewed the exhibition in the Slovakian art journal Profil. David Garcia created a video documentary for the Art TV Channel Hoeksteen (appearing elsewhere on this page)

The ecological and environmental connotations can be discerned in some of the works, but the majority of the strategies applied were instead in the genre of “site-specific” or “participatory” art. There was a conceptual link with the texts of Zdeněk Neubauer, Peter Lamborn Wilson and with then ongoing research project Elbe (1991-1994 or 95) by the American artists duo Nelson and Helene Harrison. The Harrisons proposed reclaiming the Elbe watershed (the Labe Watershed), which stretches from the mountains of northeast Bohemia (the Krkonoše) through Germany to the mouth of the Elbe in the North Sea. The Harrisons were invited by Milan Knížák to the Prague Academy of Art in 1990 or 91 (Miloš Šejn was their local collaborator). They did research on this project while art residents at the Bauhaus Dessau. Elbe was part of a larger concept for reclaiming the European landscape, including open-pit mines near Bitterfeld, Germany, and in Northern Bohemia. The Elbe project was never realized, and neither was the Fungus-proposed European network. After 20 years, in 2015, we were able to reconnect the disrupted “ecological thread” in the form of the Frontiers of Solitude project. 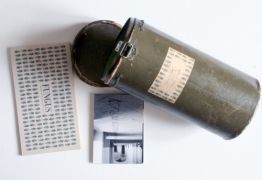 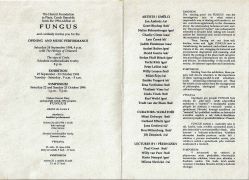 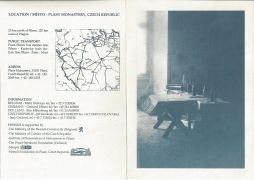