Art in the Elsewhere:
On Cemeteries, Orchards and Virtual Reality

Gallery Na shledanou (“The Good-bye Gallery”) is located in the south Bohemian town of Volyně in the Malšička cemetery in a gallery building that was intended to serve as a funeral hall. The gallery focuses on contemporary art with an emphasis on site-specific art as well as the finality of human life. In this interview, Radoslava Schmelzová sits down with curator and art historian and Jan Freiberg to discuss the various challenges and outcomes of the project.

Bucharest-based artists Anca Benera and Arnold Estefan have worked together as collaborators since 2011. Their work in installation, video, and performance uses research-based methodologies to reveal the invisible patterns that lie behind certain historical, social, or geopolitical narratives. In 2018, they were nominated for the Mac International Art Prize in Belfast. Benera and Estefan have participated in numerous international exhibitions and biennials such as 13th Istanbul Biennial, La Triennale at Palais de Tokyo in Paris (2012) and The School of Kyiv (2015).

Anca Benera and Arnold Estefán will present their past and present projects including their most recent one, the extensive Debrisphere — an investigation into the phenomenon of man-made landscapes which are often the result of conflict and war. The artists have coined the term “debrisphere” to refer to this, as yet unnamed, stratum of the Earth’s crust. They employ apparently “scientific tools” in order to imagine and map this new stratum, in which destruction, the making and marking of the landscape (as a form of spatial modification) go hand in hand with a heightened state violence and the overexploitation of resources.

The presentation will be in English.
Admission is free.
Organized in cooperation with Artmap. 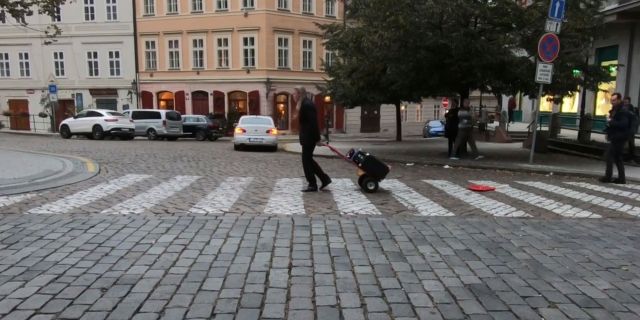 Grounding by Roi Vaara is an art work which integrates various ideas in a simple way. A performer, dressed in black suit, walks ceremonially, slowly pulling a guitar combo on hand truck. The amp is attached to a iconic symbol of Pop music - electric gutair - the walker drags it on the ground a few meters behind, attached with a sound cable. It is an artistic ritual-like performance: a brand new musical instrument - Fender Stratocaster is sacrificed as it is played. The performance took place on the streets of Pragus’s Old Town on 24 September 2019.

Ondřej Smeykal is a musician and an audiovisual artist, living and working in Prague. He graduated from the Academy of Fine Arts in Prague in 2003. Aside from creating and designing sound installations, he also plays the didgeridoo, exploring its sonic possibilities. His performance, called Wood/Metal/Breath took place at GHMP Colloredo-Mansfeld Palace on 9 October 2019.