Selections from the Hermit/Metamedia audio archives from the 1992-99 events at Plasy Monastery have been selected for radio by Miloš Vojtěchovský for Czech Radio Vltava — Radioateliér. The three episodes combine musical fragments recorded during the Hermit festivals, together with several interviews and field recordings of the environs, as well as the resonant interiors of the convent building.

We are pleased to offer these download links to the three episodes, which were broadcast during the month of February.

14 February Episode 2: Following The Traces Of An Ermine
Listen: prehravac.rozhlas.cz/audio/3981587

Future of the Past

As in a few other European countries in recent years, politics in Macedonia have been carried out on the visual and symbolic plane. Making their political visions visible in public was one of the highest priorities to the former, nationalistic government, which extensively rebuilt public space, covering it with historicized sculptures, monuments and new decorative buildings, and striving to reframe Macedonian history and creating a new memory. This new memory, based on an imagined past, is the result of a political crisis, in which a society’s future development has lost its promise, and the past is imagined as more secure and comfortable. Macedonia's historicized architecture is a testimony to an anxiety about the future, the fear of obsolescence and constitutes a crisis of representation.

An Interview with Dalibor Knapp

Dalibor Knapp is a researcher and artist who makes video essays, texts and installations. In his work he deals with social and cultural layers of so-called reality and the constructions of various languages that talk about it. A common feature of these works is the ubiquitous question of human cognition. Knapp is also author of the first Czech book on digital colonialism — Digital Negroes: An Ethnographic Dictionary (2017). To mark the occasion of its publication, we talked with its author about black monoliths, a shift in the understanding of colonialism, and about the stratification of digital space. 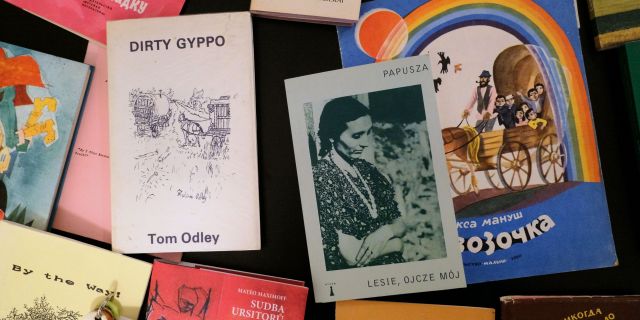 As part of the opening of the Romafuturism Library and Center for Roma Culture, a 12-hour-long reading marathon of Elena Lacková’s book I Was Born Under a Lucky Star took place. We present a unique recording of an experimental “audiobook,” interpreted by 24 different readers, consisting of guests, collaborators and friends of the library. Each one read for 30 minutes before passing the lectern onto the next, for a 12-hour-long continuous reading of the book.

Czech premiere
Dawson City: Frozen Time, a feature length film by Bill Morrison (US), pieces together the bizarre true history of a collection of 533 films dating from the 1910s to 1920s, which were lost for over 50 years until being discovered buried in a sub-arctic swimming pool deep in the Yukon Territory. Using these permafrost protected, rare silent films and newsreels, archival footage, interviews and historical photographs to tell the story, and accompanied by an enigmatic score by Sigur Rós collaborator and composer Alex Somers (Captain Fantastic), the film depicts a unique history of a Canadian gold rush town by chronicling the life cycle of a singular film collection through its exile, burial, rediscovery, and salvation – and through that collection, how a First Nation hunting camp was transformed and displaced.

They form a pair. Martin Krkošek and Pavla Krkošová Byrtusová, partners both in their personal and professional lives, live in Návsí u Jablunkova, a stone’s throw away from the Slovakian border, just between Třinec and Žilina. “We are a self-supported screen printing workshop. We try to do things at low cost, but with that much more devotion. We are sometimes pleased with the flaws which occur, as they are really an integral part of the whole process. We do not like to call our customers ‘clients,’ and are glad to make friends with them, which usually happens naturally anyway,” says Krkošek.

Kavárny Naživo Brings Art to the Cafés of Europe

The festival Kavárny Naživo takes place every October across major Czech cities and, since 2016, also in Dresden. That year, the festival drew a total of 17,000 visitors. The program is composed of of various events taking place the cafés themselves, consisting especially of lectures, music, theatre, poetry performances, workshops and exhibitions, while also offering people the chance to vote in various categories for their favorite café, staff, coffee, or interior design. The intention is to “fill the program with events which strike a chord in the local residents,” says Jakub Stejskal, one of the project’s founders, ”and to bring art and culture essentially to their doorstep.”